MURDER IN THE BEXAR COUNTY JAIL

DISTRICT ATTORNEY LAHOOD AND SHERIFF PAMERLEAU  COVER UP THE HOMICIDE

In July 2015, an inmate was murdered inside the Bexar County Jail.

Original reports were published to conceal the homicide and cause of death. Bexar County Sheriff Susan Pamerleau stated that his death was not the result of any actions by jail staff or other inmates. A year after the murder Bexar County District Attorney Nico LaHood states that he knows nothing about the case while he calls citizens inquiring about the death “ troublemakers” and other names . LaHood lies when he states that he will ask for an update and will reply to requests for information. LaHood refuses to post information concerning the homicide , erases information posted by citizens and then bans taxpayers from his social media site he uses to communicate with citizens to halt the flow of questions and information.

And now the rest of the story.

“ An inmate at the Bexar County Adult Detention Center died Sunday afternoon at an area hospital. Robert Mosley, 54, died at Metropolitan Methodist Hospital from complications related to detoxification, a preliminary investigation indicates.
An autopsy will determine the exact cause of death, according to a Bexar County Sheriff’s Office news release.
Mosley was booked into the Bexar County Adult Detention Center on July 22 charged with DWI. Despite no evidence of foul play, an investigation into the inmate’s death has begun, authorities said, noting it is standard procedure. “

SAN ANTONIO — The death of a Bexar County Jail inmate has been ruled a homicide, the medical examiner’s office confirmed to the KENS 5 I-Team on Tuesday…. A preliminary investigation by the Bexar County Sheriff’s Office concluded Mosley died from complications related to detoxification. However, an autopsy revealed Mosley actually died of hemorrhaging from a fractured hip socket.

The SA Express News published a statement by Robert’s family when they provided some important background information.

“ Mosley’s sister Kathy Selby said he was visiting from Arizona in 2003 when he was arrested and charged with DUI, noting his brother bailed him out the following day. Selby added that he returned to San Antonio voluntarily in July when officials began reaching out to him to pay the bail bond or come to court.

“When he came on a Thursday they locked him up and then Sunday he was dead,” she said.”

Four months after Robert died an autopsy and background information shows that he died of hemorrhaging from a fractured hip socket and not from detoxification. We learn that the DUI charge was from 2003….thirteen years earlier. We learn that when Robert returned from Arizona he voluntarily tried to follow the law and turned himself in to address the outstanding warrant. We learn that four days later Robert died after his hip was fractured somewhere inside the jail facility and was hemorrhaging.


A few minutes of research disclose that “potential causes of broken hips include falls to a hard surface from a great height or blunt trauma to the hip, such as from a car crash .” - Healthline Media

On-line sources state: If you have a fractured hip, your hip will be painful and you won't be able to lift, move or rotate your leg. You'll usually be unable to stand or put weight on your leg….If you think you've fractured your hip, you'll need to get to hospital for treatment as soon as possible. - NHS Choices

Numerous publications agree that : “ Hemorrhage is any profuse internal or external bleeding from the blood vessels. The most obvious cause of hemorrhage is trauma or injury to a blood vessel.”  “ After a traumatic injury, hemorrhage is responsible for over 35% of pre-hospital deaths and over 40% of deaths within the first 24 hours,[1] second only to the rates of death due to severe central nervous system injury. A cascade of life-threatening medical problems can begin with severe hemorrhage, and many of these occur simultaneously: 1) hemorrhage, 2) impaired resuscitation, 3) shock, 4) inflammation and 5) coagulopathy (Fig. 1). The severity of each problem is commonly associated with the extent of overall blood loss. Low blood pressure due to blood loss indicates immediate complications, including the incidence of multiple organ failure and life-threatening infections.[2, 3]” - National Trauma Institute

The media published a statement by Bexar County Sheriff Susan Pamerleau on December 8, 2015 where she stated: “In reference to the inmate death ruled a homicide, we do not believe Robert Mosley’s death was a result of any actions by employees or other inmates.

On one media web-site a citizen comments:  “ Trent Lopez -why r no journalists following up on this investigation or the death of inmate Luna?  why not follow up on all the supposed firings of jail staff?? what happens to the "investigations"? they r just for show and go into a big pit with the rest over the years..swept under rug.  the staff they want are quietly gone back to work and sometimes even promoted!”

The FBI, the DOJ, the DPS, Attorney General Paxton and others ignore certified mail and play along with the cover-up. 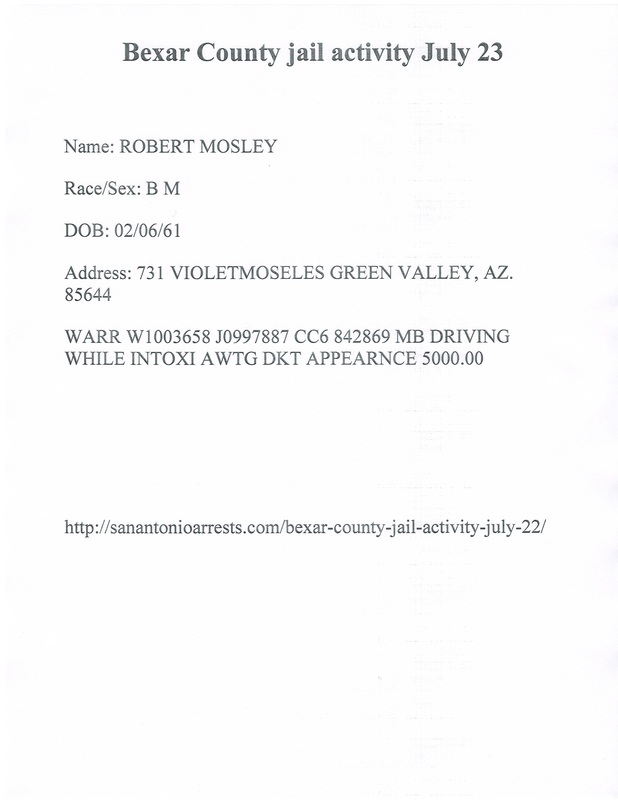 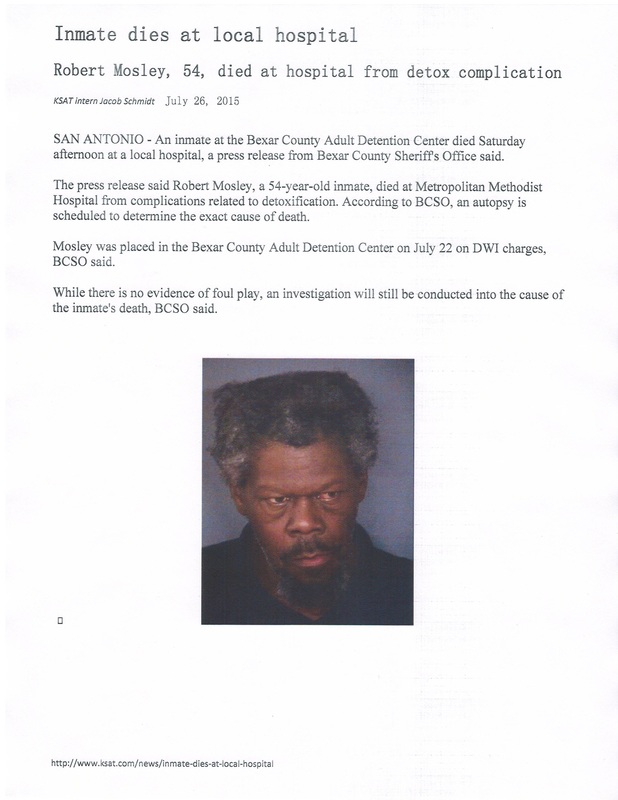 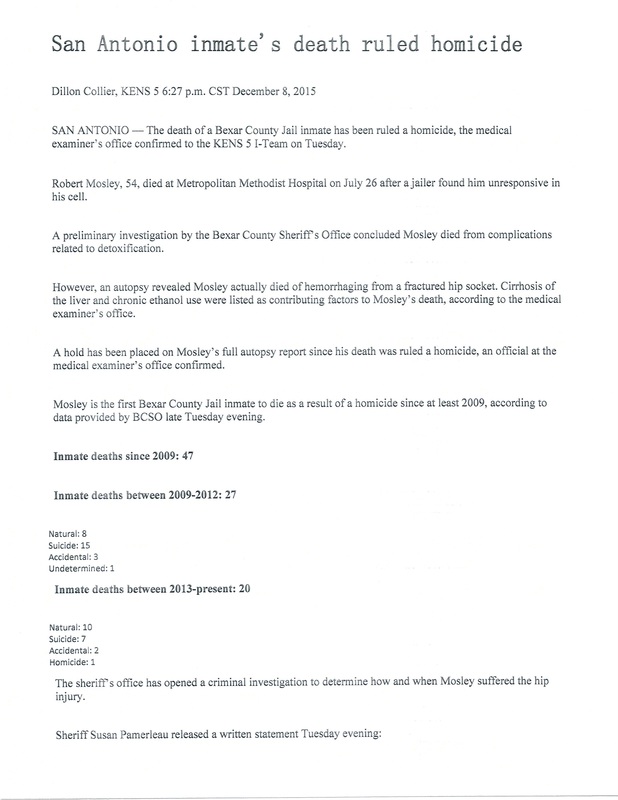 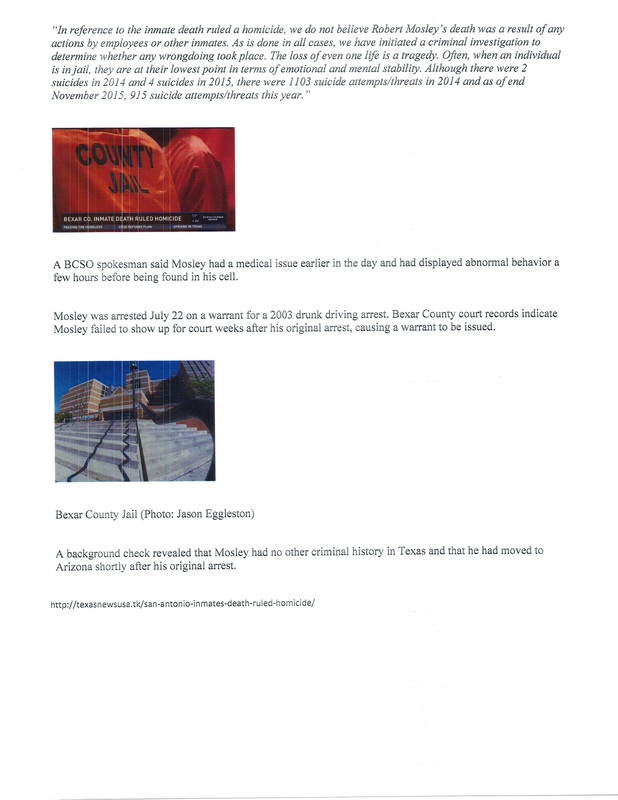 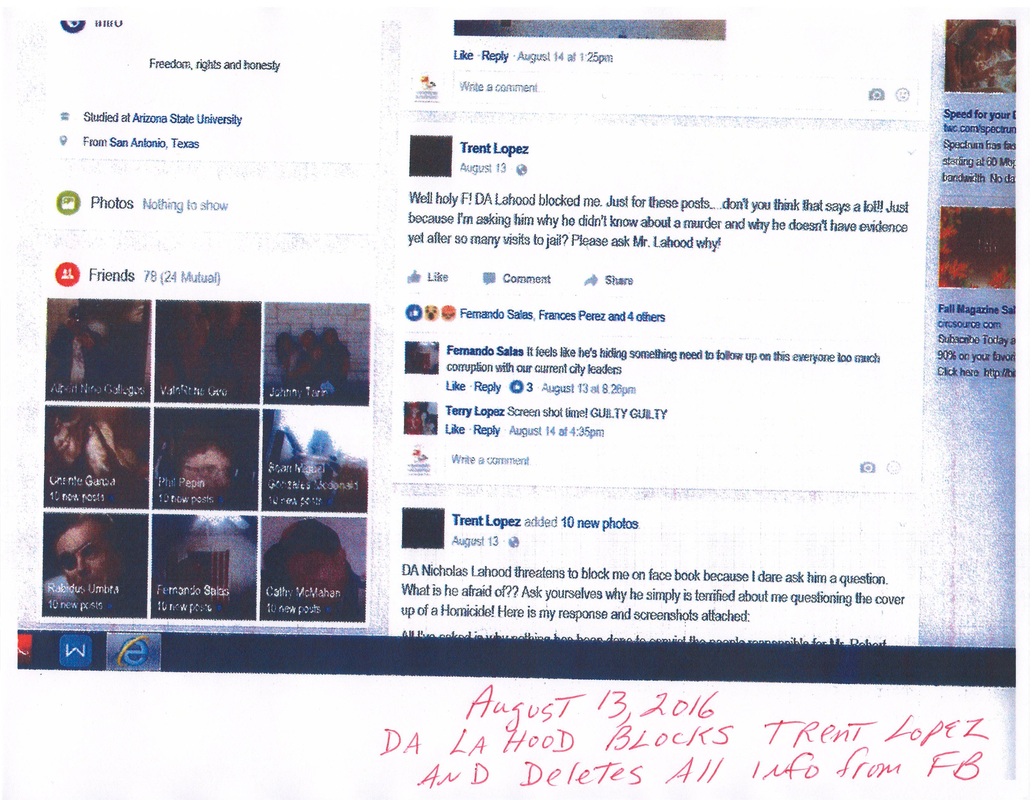 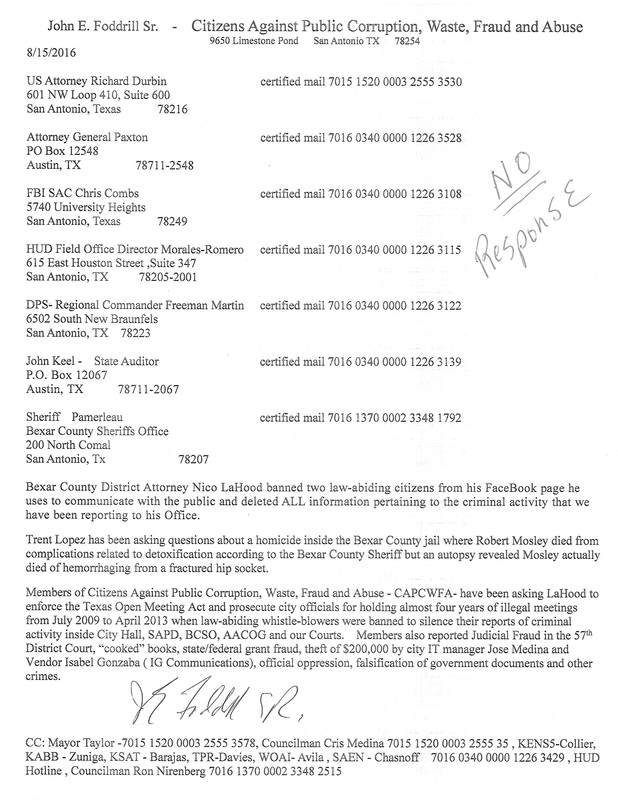