HANDS UP - DON'T SHOOT ...The Black Community is "PLAYED"

HOW WILL THE BLACK COMMUNITY REACT WHEN THEY LEARN THAT THEY HAVE BEEN "PLAYED" , "LIED TO" AND "USED FOR A PR STUNT" BY THE BLACK MAYOR, THE POLICE CHIEF, THE DA , THE CITY MANAGER AND OTHER CORRUPT OFFICIALS AT THE CENTER OF AN ONGOING CRIMINAL CONSPIRACY INSIDE CITY HALL / SAPD / DA'S OFFICE , BCSO , AACOG AND OUR COURTS ?


Corrupt City of San Antonio TX officials put on a "dog and pony show" on Sept. 21, 2016 for the Black Community  while they
ban the media and citizens from the meeting......... ..Believe nothing they say.

Mayor Taylor, Chief McManus, DA LaHood, Councilperson Viagran, Councilperson Saldana and CM Sculley aren't telling the Black Community that almost four years of illegal city meetings, "cooked" books, aggravated perjury in the 57th District Court and the Federal Court financed with tax dollars, the theft and misuse of tens of millions of dollars illegally siphoned from Health/Housing/Library/Fire/ Police/Public Works/WIC/911/Animal Care/Parks/Transportation Budgets, the fact that funding to repair the failing 911 System where ONE in FOUR calls failed over the past TEN years was denied by City officials while people suffered and died , municipal bond fraud and other crimes that impact the safety and well-being of our citizens ( including the Black Community) are being covered up.

The City’s lack of transparency is CRIMINAL as officials are also concealing illegal activity including corruption, theft of public funds,
Judicial fraud financed with tax dollars, official oppression, 4 years of illegal illegal city council meetings when whistle-blowers were banned to silence them, grant fraud, municipal bond fraud , homicides inside the Bexar County jail , the murder of unarmed citizens by the police ( many times citizens were gunned down with their hands raised in the air) and other crimes.


Citizens continue to call for a special prosecutor and an outside, independent criminal inquiry.


The SA Express News published an article on the “for pay” site. Please purchase a paper asap.

The paper deletes our info and bans our accounts to help hide the corruption. 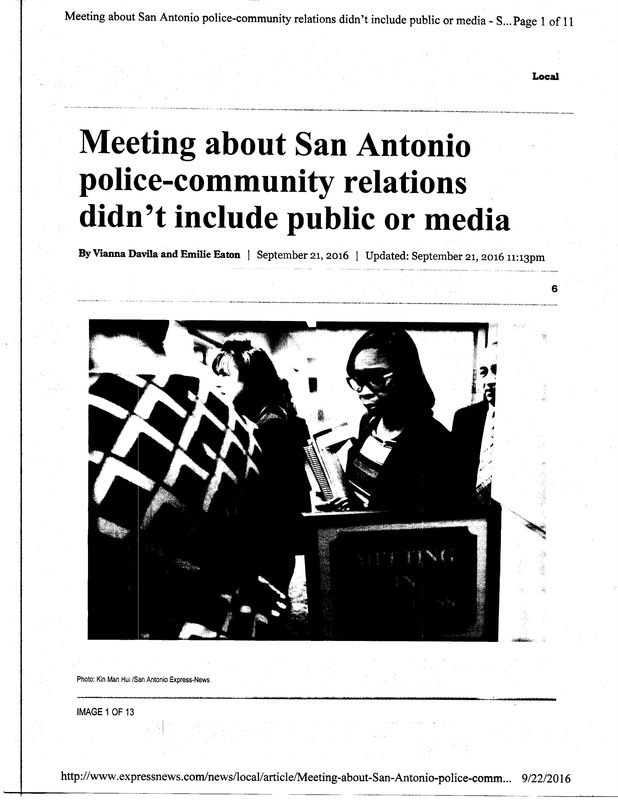 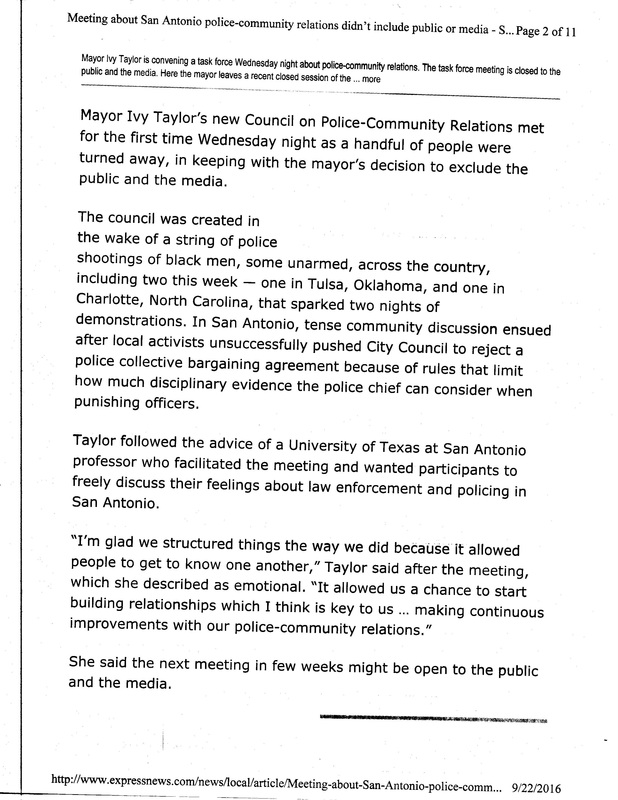 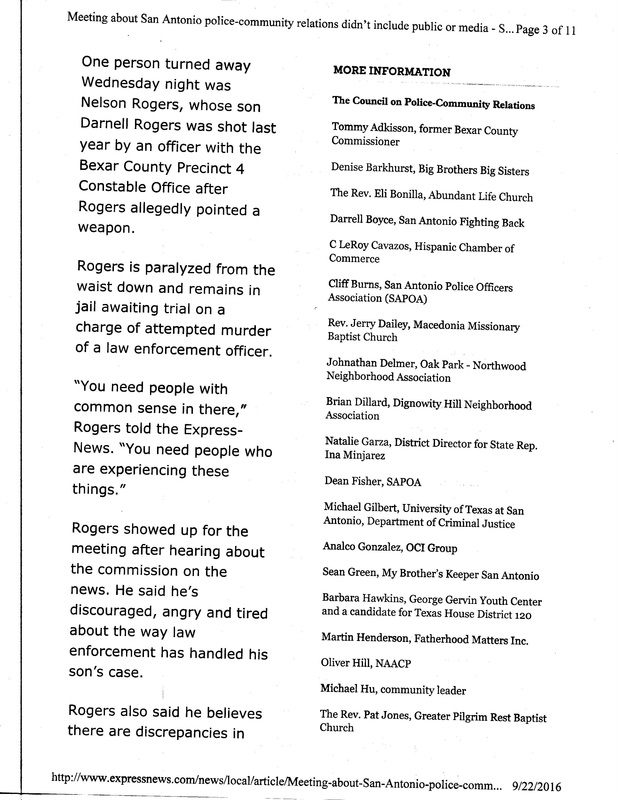 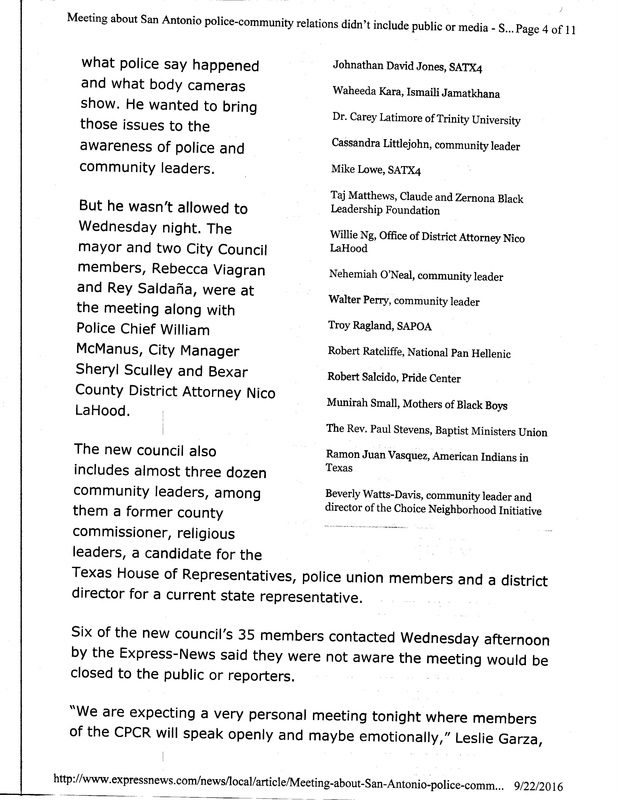 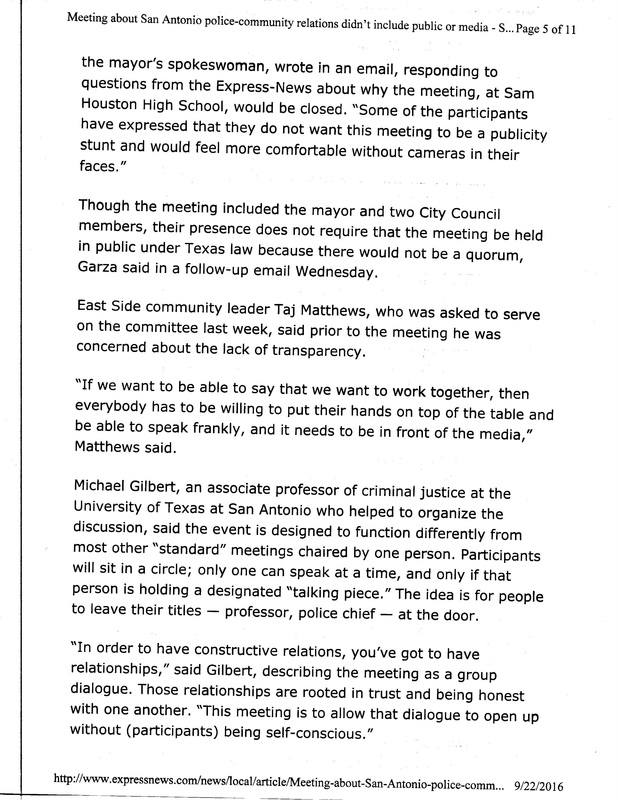 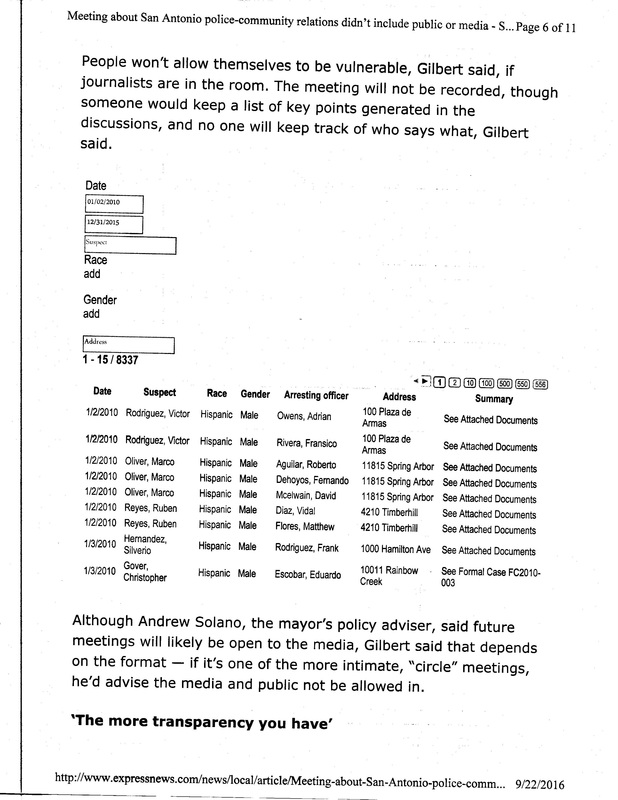 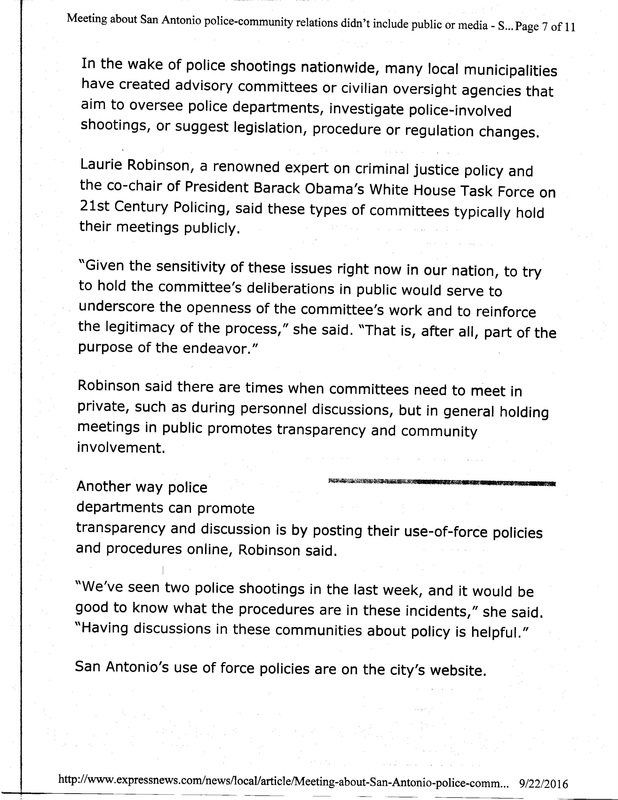 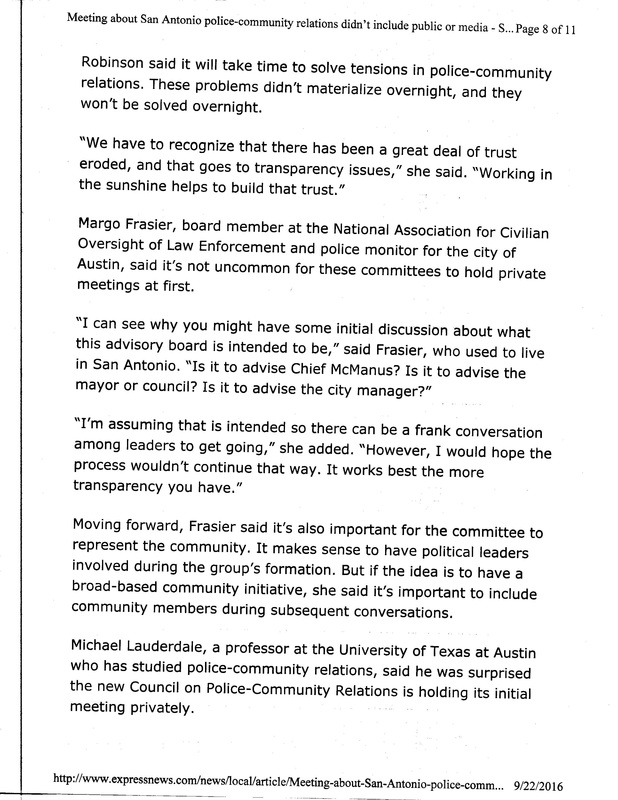 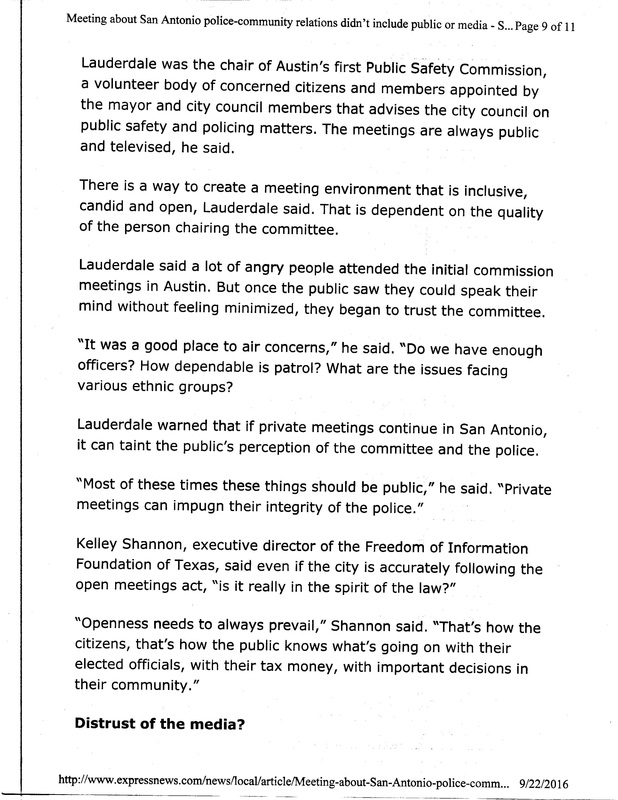 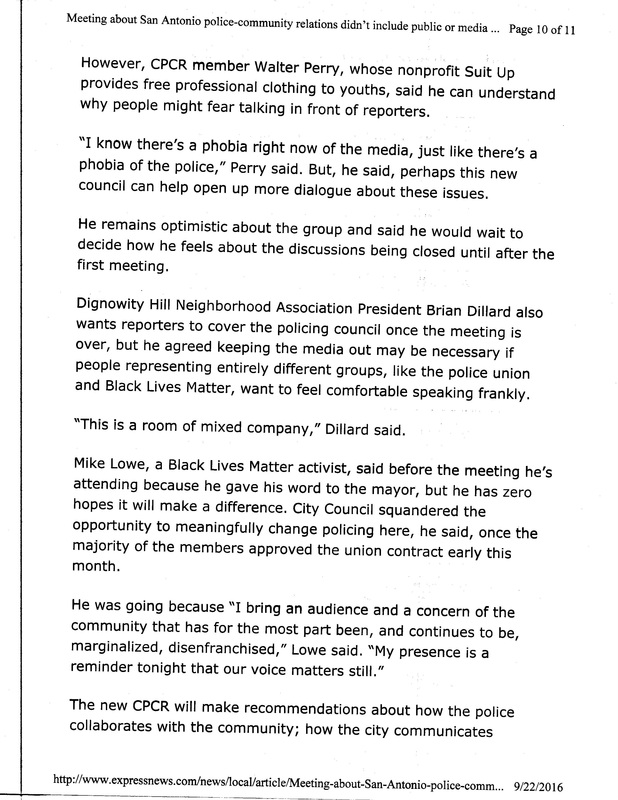 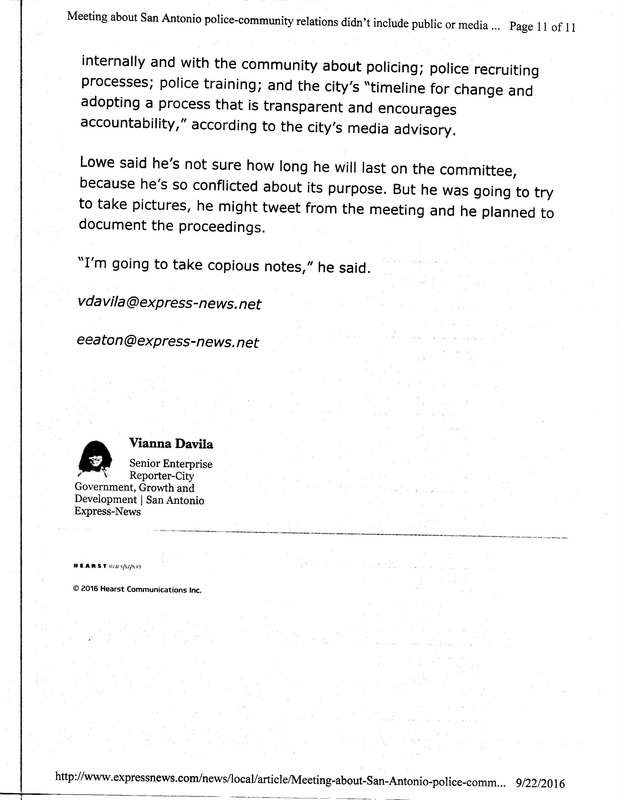