Bexar County District Attorney Nico LaHood has violated the law and the Texas Public Information Act while
trying to conceal a criminal conspiracy for his corrupt friends. On Nov. 19, 2015 LaHood stated in an official
open records reply that he has no documents BUT the US Postal Service provided proof that LaHood received
at least five certified letters detailing years of public/police corruption...LaHood lied, concealed evidence and,
refused to enforce the TOMA in violation of the law to protect Castro and other friends. FaceBook screen-shots
show that LaHood has been aware of the criminal conspiracy since taking office in January 2015 and he has
attempted to discredit all reports by cyber-bullying whistle-blowers in an effort  to protect Mayor / HUD Secretary Julian
Castro, Attorney Michael Bernard ( brother of white house social secretary Jeremy Bernard) ,  police officers, judges, attorneys, sheriffs, police chiefs and City/County officials.

On June 16 SAEN reporter Brian Chasnoff published an article detailing the cyber-bullying by DA LaHood targeting
whistle-blowers reporting criminal activity including the 4 years of illegal meetings Julian Castro participated in
when citizens were banned to silence their reports of corruption from July 2009 to April 2013.  In July 2016 a
whistle-blower came forward reporting that DA LaHood had taken a bribe to drop criminal charges against
real-estate broker Debra Austin after conversations with  HUD Asst. Deputy Secretary Lourdes Castro Ramirez.
The whistle-blower reported that  Ramirez and other HUD / SAHA officials/employees were given direction to
harass and frame another citizen in retaliation for reporting the criminal acts of Debra Austin who was indicted for
felony theft last year.  On August 15, 2016 LaHood banned whistleblowers from his FB page and deleted ALL
information pertaining  to the ongoing criminal cover-up, a mysterious homicide in the Bexar County jail and reports
of a whistleblower reporting the fact that LaHood took a bribe to drop criminal charges of felony theft.  On
August 17, 2016 , FBI Agent Fernando Llanos ( 210-225-6741 ) met with members of a national Constitutional
Rights organization and examined PROOF of the ongoing RICO-like criminal conspiracy inside City Hall, SAPD,
BCSO, AACOG and our Courts. On August 20. 2016 the SA Express News published a multi-page expose putting
corrupt DA Nico LaHood at the center of a PONZI scheme stealing millions of dollars from investors including a
family that had just  lost children and friends to a horrific accident.   On August 23, 2016 FBI Agent Fernando Llanos was provided with a CD of information and a link to online info at Castrogate.com concerning the criminal acts of crooked DA LaHood and other illegal activity. On August 24th the SA Express News published another article exposing LaHood's failure to disclose a business interest in official documents / filings or to citizens reporting that they had been defrauded of millions of dollars to him (Documentation is posted on this page - please
scroll  down)


LaHood has conspired with other corrupt officials to conceal a DECADE of public/police corruption , the theft/
misuse of tens of millions of OUR dollars, Judicial fraud in the 57th District Court and Federal Court to hide the
criminal activity, HUD fraud - case HL-10-0465 at four years of illegal city meetings when money / land
( including the  federal Courthouse / Hemisfair park property/ land held sacred by Native Americans)
was illegally transferred in violation of the law after whistleblowers were banned to silence them, City officials'
refusal to repair the failing 911 Emergency Communications System and the fact that ONE in FOUR 911 calls have
failed over the past TEN years putting the lives of 1.5 MILLION residents, 31 MILLION Tourists a year,
MILLIONS of Military Personnel and First Responders at risk.

LaHood is concealing the fact that SAPD Chief McManus and city attorney Michael Bernard ( brother of White
House Social Secretary Jeremy Bernard) issued at least two illegal, unconstitutional criminal trespass warnings
barring entry into City Hall and public meetings to silence reports of the illegal cover-up.
They confiscated proof of the criminal activity and swore everyone to secrecy. City officials including City
Manager Sheryl Sculley , Mayor Ivy Taylor, Councilman Cris Medina and Councilman Ray Lopez played along
with the cover-up and participated in forty-five (45) months of illegal meetings in violation of the Texas Open
Meeting Act, the Constitution, the City Charter, the Texas Local Government Code and other laws ( July 2009
to April 2013).

LaHood has been hiding the fact that City Manger Sheryl Sculley, City Attorney Michael Bernard and others paid
the law firm of Fitzpatrick & Kosanovich with OUR tax dollars to defraud the 57th District Court of Judge
Antonia Arteaga and the Federal Court of Judge Xavier Rodriguez in an effort to conceal the ongoing criminal
cover-up. Judge Antonia Arteaga, attorney Malinda Gaul, attorney Mark Kosanovich, attorney Deborah Klein
played along with the Fraud upon our Court and concealed material evidence including the deposition of City CIO
Richard Varn, Administrative Directive 6.12, a search warrant for the bank records of City IT Manager Jose Medina,
documents showing the theft of $200,000 by Medina and city vendor Isabel Gonzaba and documents showing
illegal no-bid contracts .The Federal Probe by the US Attorney - District of New Mexico in 2015 didn’t go far
enough in exposing the corruption infecting our local government, our police department and our Courts.
Judge Rodriguez refused to hold a preliminary hearing and call for criminal charges when attorney Shawn
Fitzpatrick, SAPD Chief McManus, attorney Michael Bernard and Mayor Julian Castro ( representing the City)
lied and stated that there was no perjury in the 57th District Court and there ws no criminal conspiracy to
conceal the ongoing illegal cover-up.

LaHood has been hiding the fact that City IT Manager Jose Medina and city vendor Isabel Gonzaba ( IG
Communications / Globalscope) engaged in a conspiracy to falsify the invoices and billing records submitted
to the Government of the United States, the State of Texas, the City of San Antonio, Texas and others via
numerous Avaya contracts including the Texas Department of Information Resources Avaya contract. They
conspired to use various billing systems including the City’s telephone variable billing account, the Avaya
contract billing account and the State of Texas DIR billing account to inflate the number of hours worked
on telecommunications support including grant funded projects/orders/service requests and to alter the
invoices and billing records upon which the payments were based. They engaged in this illegal conduct to
fraudulently obtain what is estimated at $170,000-$200,000 during an approximate time frame of 2002-2005.

Citizens call for the immediate appointment of a Special Prosecutor to oversee criminal investigations in Bexar
County Texas including the investigation and prosecution of Julian Castro as Bexar County District Attorney
Nico LaHood lies and conceals evidence in an effort to hide an ongoing RICO-like criminal conspiracy .
ButtoTet 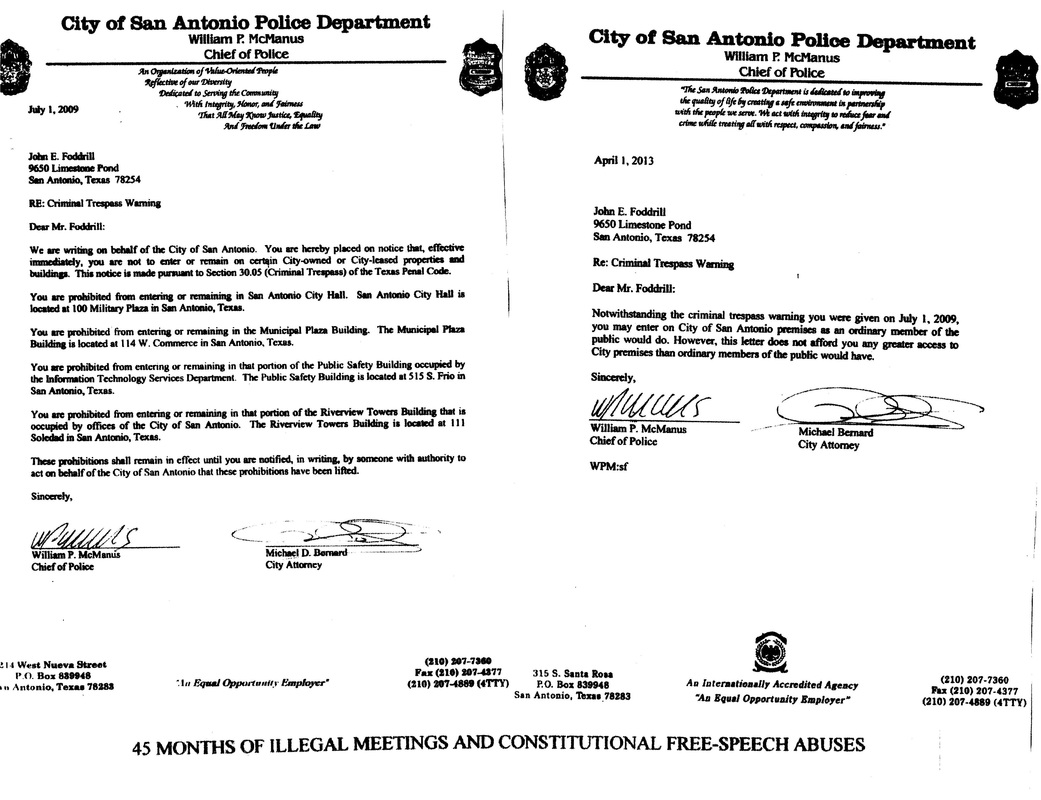 Mayor / future HUD Secretary Julian Castro, SAPD Chief William McManus, city attorney Michael Bernard ( brother of White House Social Secretary Jeremy Bernard) , City Manager Sheryl Sculley, the City Council and others banned the law-abiding City's former Telecommunications Manager / whistle-blower from City Hall and public meetings in violation of the US Constitution, the Texas Open Meeting Act and other laws in an effort to silence reports of massive, long-term public / police corruption and other crimes. They refused to provide a reason, due process or time limit for the illegal, unconstitutional ban. The illegal, unconstitutional ban lasted from July 2009 to April 2013- almost four years during which time Castro and other corrupt officials held illegal meetings in violation of the law.......Bexar County DA Nico LaHood conceals evidence and REFUSEs to enforce the TOMA and other laws in an effort to protect his friends inside City Hall, SAPD, BCSO, AACOG and our Courts. 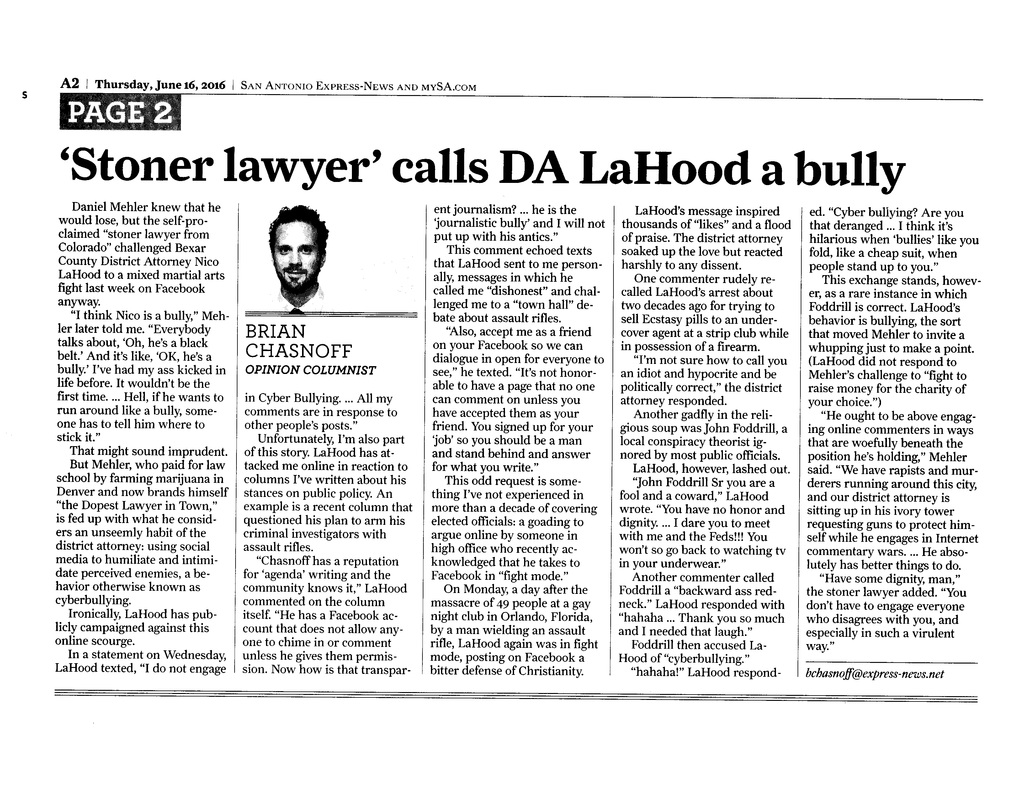 On June 16, 2016 SA Express News reporter Brian Chasnoff published an article detailing the cyber-bullying by DA LaHood targeting whistle-blowers reporting criminal activity including the 4 years of illegal meetings Julian Castro participated in when citizens were banned to silence their reports of corruption from July 2009 to April 2013. 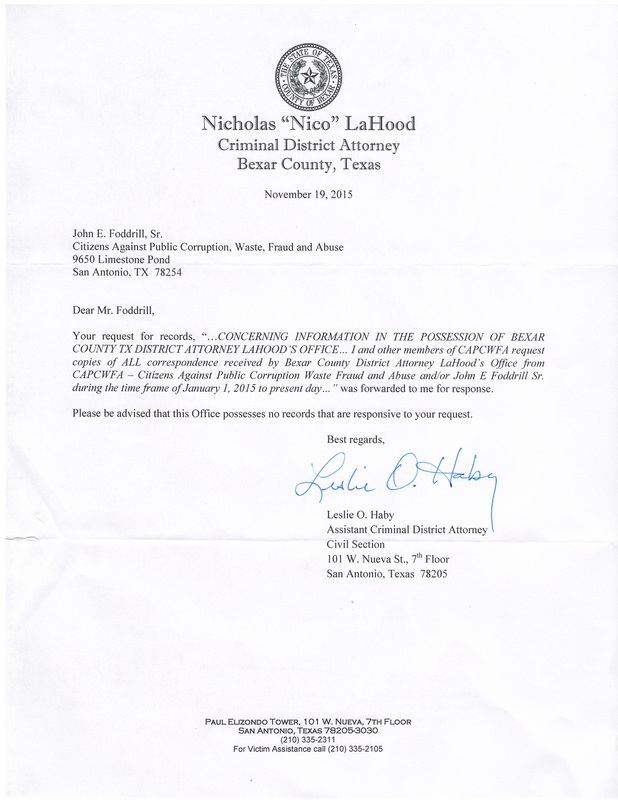 On November 19, 2015 DA LaHood responded to an Open records Request asking for ALL correspondence from CAPCWFA and/or John E Foddrill Sr stating that his office had NO documents/records...a LIE. 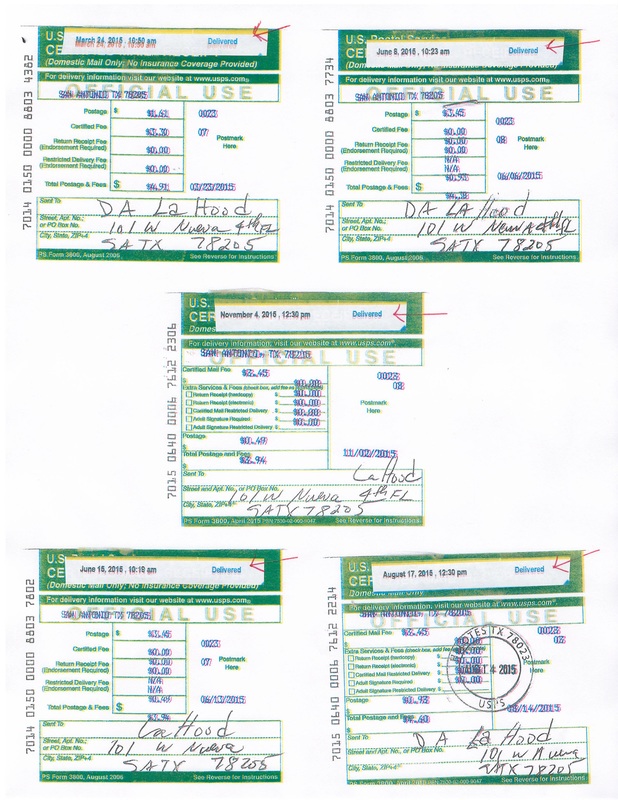 The US Postal Service provided proof that DA LaHood's Office received at least five certified letters in 2015 that citizens had sent along with CDs of information detailing the ongoing criminal conspiracy that LaHood is hiding in an effort to protect his friends including HUD Secretary Julian Castro, attorney Michael Bernard ( brother of White House Social Secretary Jeremy Bernard), SAPD Chief William McManus , City Manager Sheryl Sculley and others. ...DA Nico LaHood lied in an effort to conceal evidence and cover up the criminal activity for his friends. 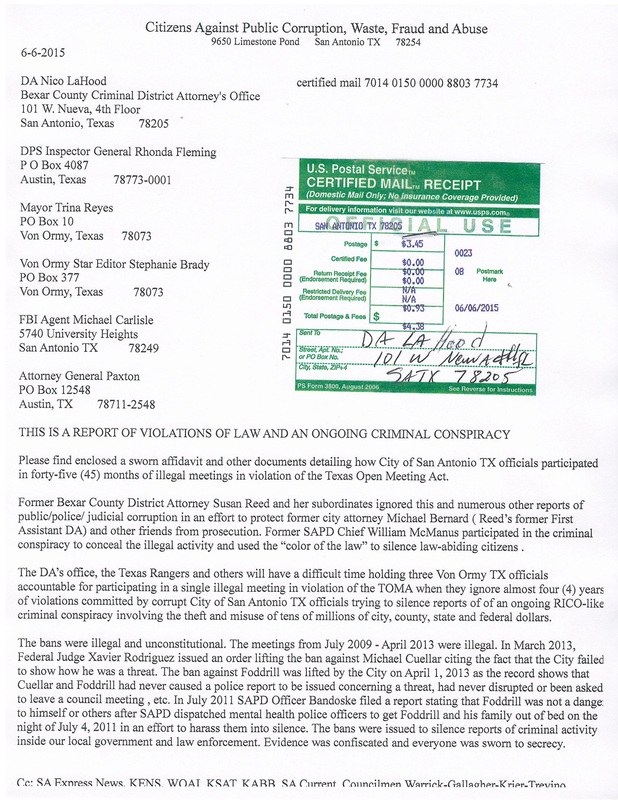 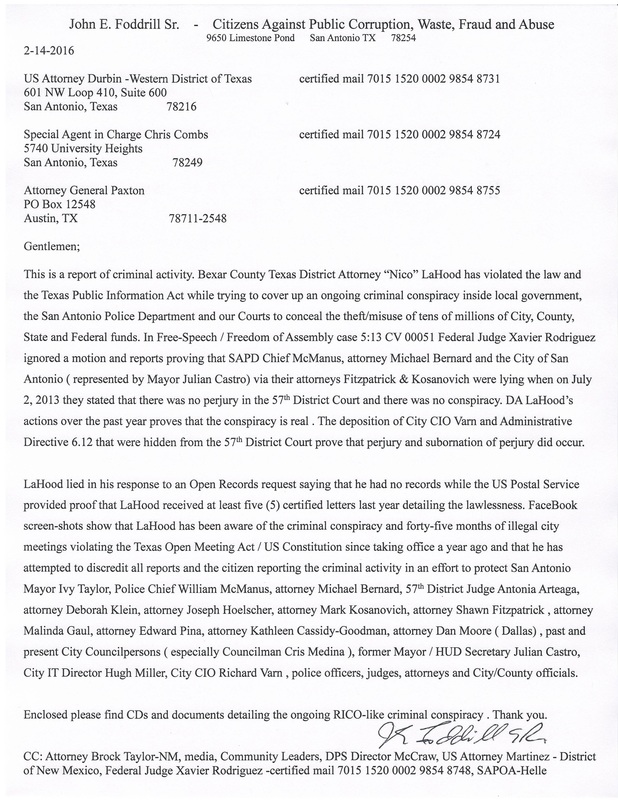 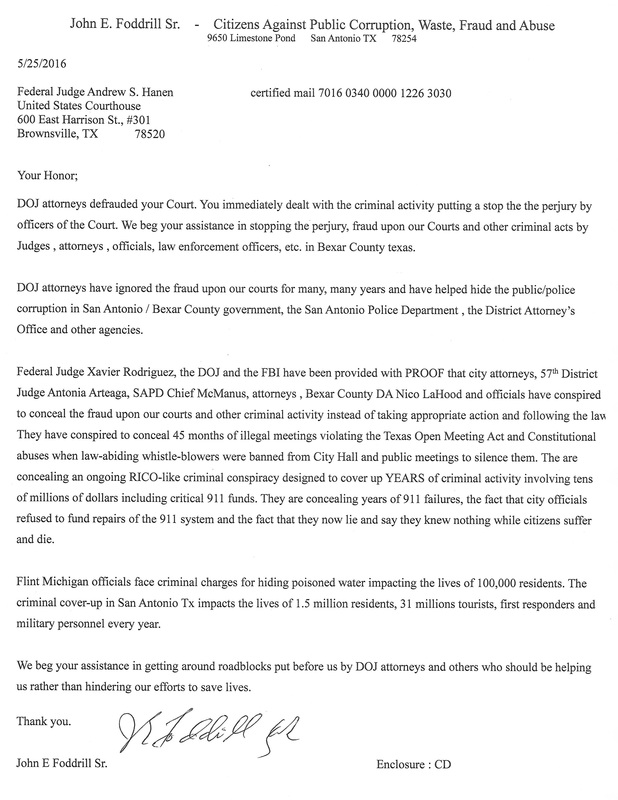 Federal Judge Hansen stopped the fraud upon his court and held DOJ attorneys accountable for the perjury..we aasked for his assistance in exposing the fraud upon our 57th District Court and Federal Court...We received no reply. 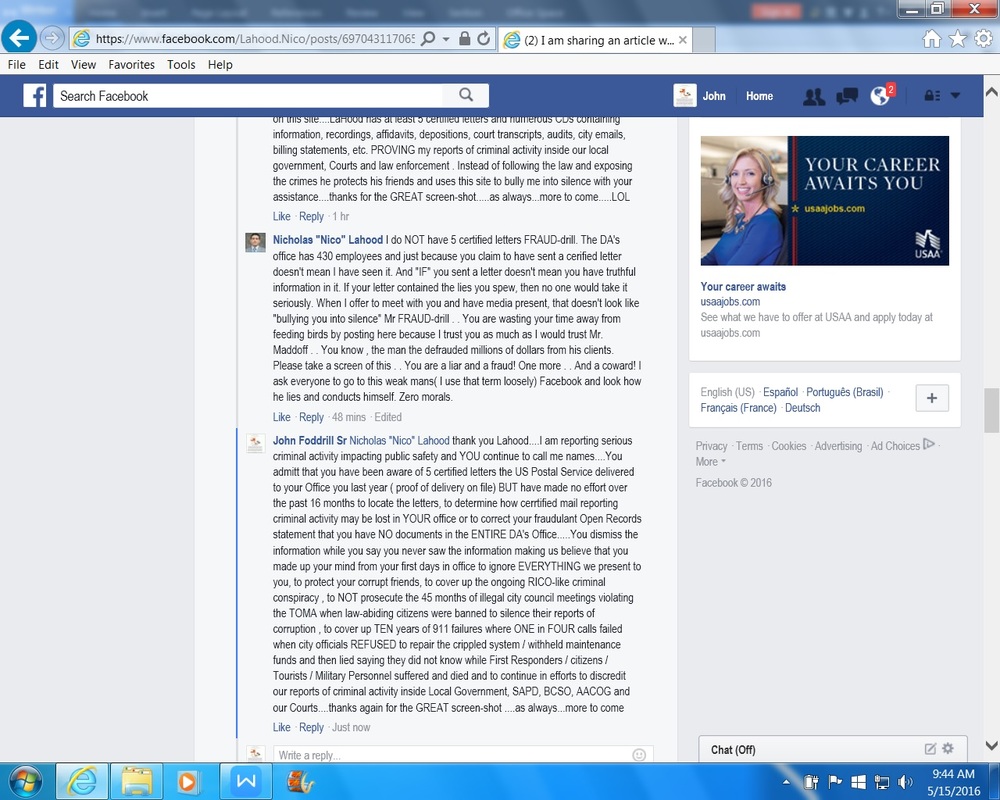 This FB screenshot shows DA LaHood calling the City's former Telecommunications Manager " FRAUD-rill" , a liar, a coward and a fraud. LaHood denies having 5 certified letters he received in 2015 . 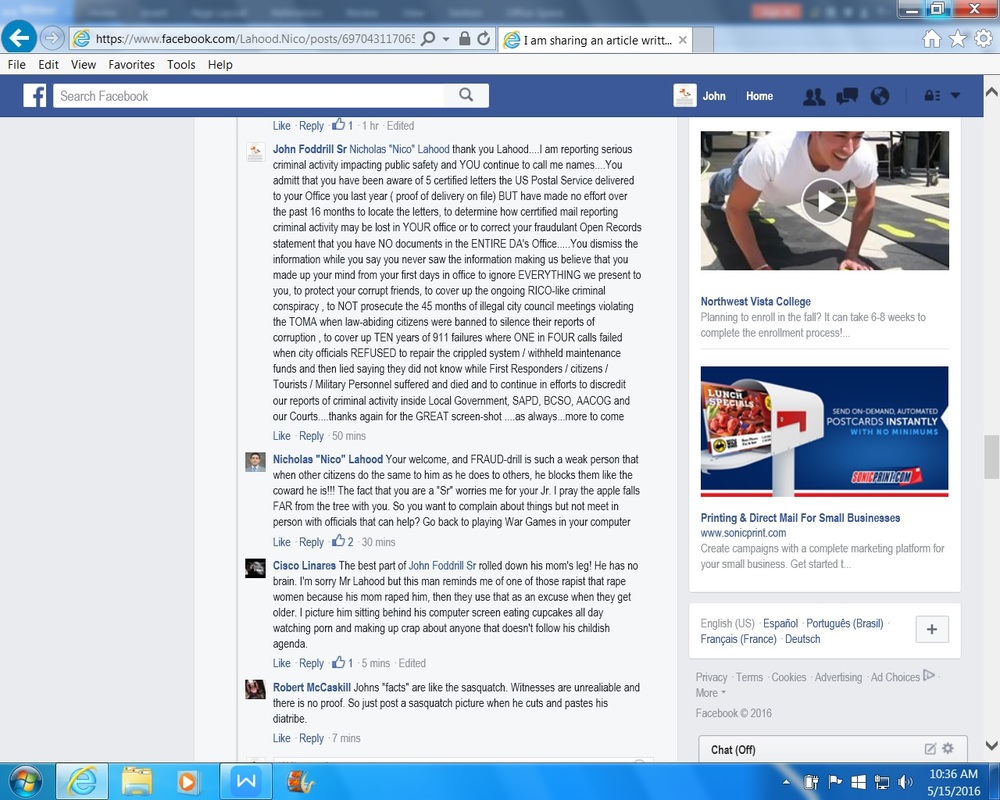 Screen-shots of LaHood’s public FB page show LaHood and his cronies bulling the City’s former Telecommunications Manager and calling him worthless, a liar, a political hack, the Foddrill type, insignificant, a troll ,a coward , “FRAUD-rill” and other names in an effort to discredit reports of the public / police corruption. Here his cronies make vulgar attacks that LaHood applauds. LaHood attacks the son of the whistleblower as well. 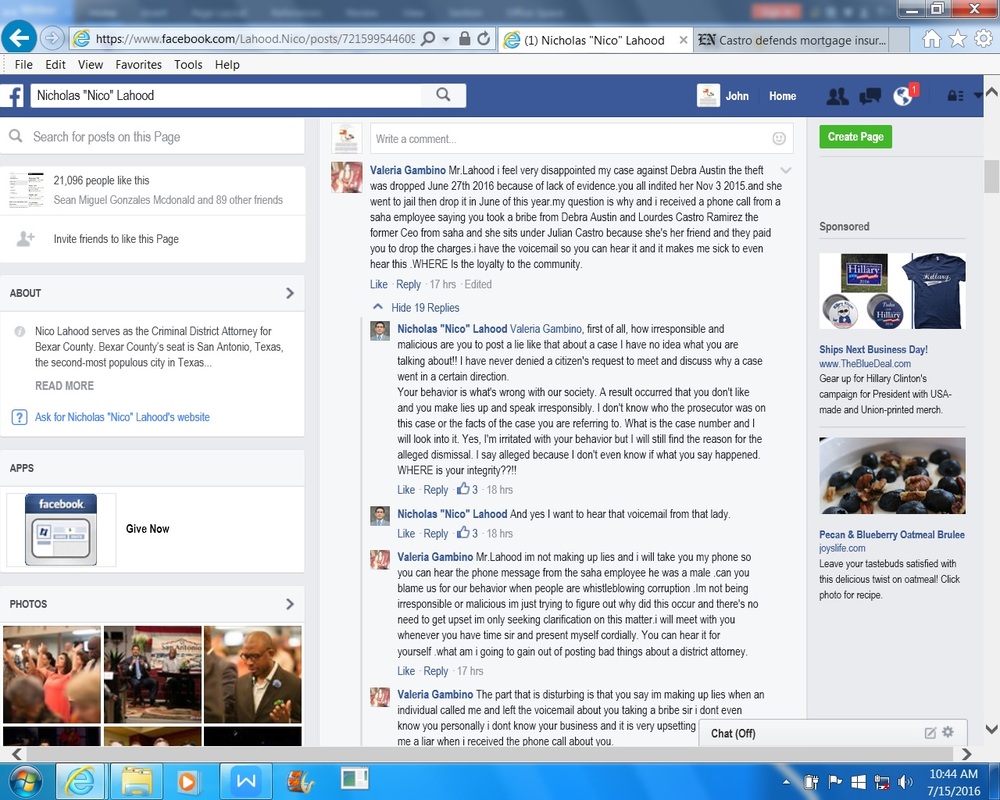 This FB screenshot shows a citizen reporting the fact that she received a voice message indicating that DA LaHood accepted a bribe from San Antonio Housing Authority - SAHA employees to drop a criminal case and that HUD Deputy Secretary Lourdes Castro Ramirez and others orchestrated retaliatory attacks against her. The HUD IG was contacted concerning these allegations of criminal behavior. The info and voice recording was posted on https://www.facebook.com/Jefsr as well. A video documenting this event is posted below and is posted on-line at https://youtu.be/5__WvFq-tfM. 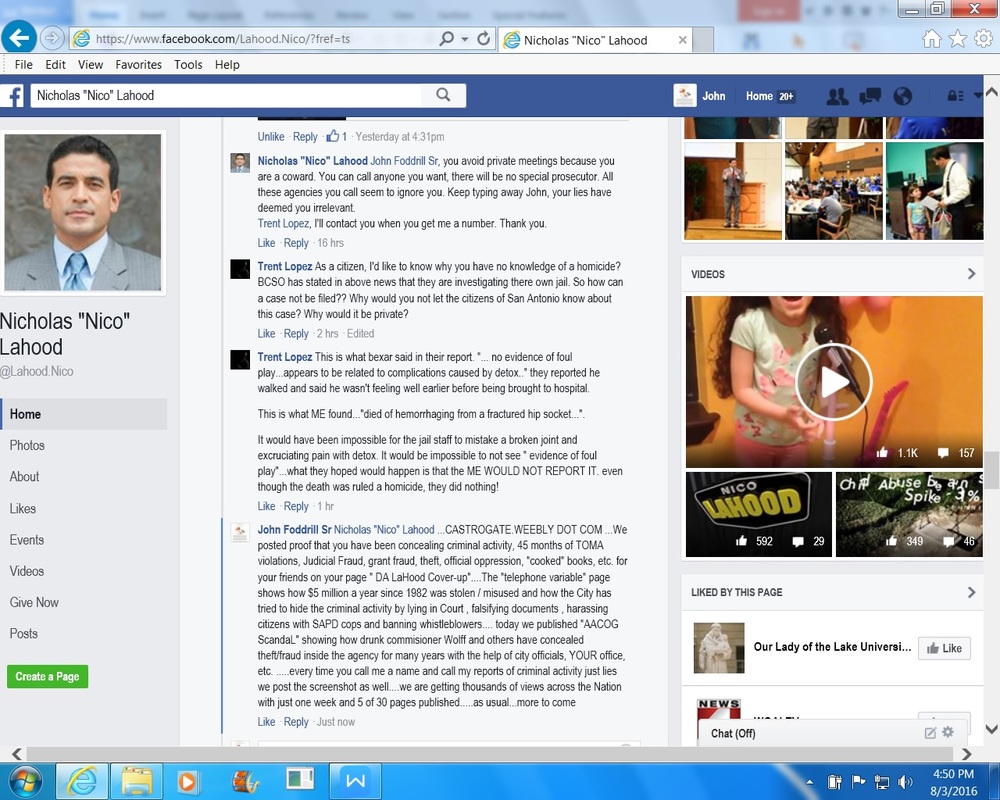 8/3/2016....Bexar County DA Nico LaHood continues with his cyber-bullying calling a law-abiding citizen a coward and his reports of criminal activity lies....... 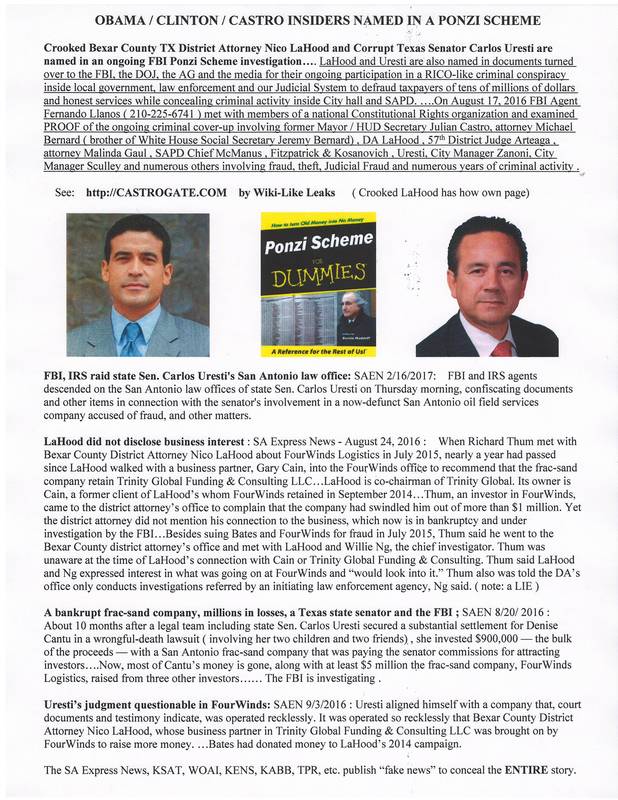 I, John E. Foddrill Sr, personally spoke face to face with Senator Uresti on several occasions at which time I provided him with details of an ongoing criminal conspiracy involving Bexar County DA Nico LaHood , SAPD Chief McManus and other officials. I was unaware of the business ties Uresti had to LaHood and Uresti never mentioned any such ties to me while I detailed criminal acts committed by LaHood to help conceal years of public / police corruption. I now understand why Uresti feigned interest but did nothing .